is freshly made by the kitchen upon your order,  and then is brought to you by waiter, only 3 pieces of fish and 2 small shrimps,  you probably won't order more to show your excessive appetite for expensive stuffs .. 1-29-2019

, but serve you not slowly ，a very small wok

wok fried "large" prawn with soy sauce (translation from "鼓油王炒大蝦" ) ,  however, "prawn" is different from "shrimp" mainly by its feet/claws, they are not obviously "large" shrimps,  1-29-2019 pic. left: pic. : Mandarin Oriental Taipei -  cafe, buffet restaurant:  when reserving a seat by phone, you are asked to be dressed properly,  lunch starts around 12 o'clock, it's later than that of Sheraton (11:30), Shangri La's (11:45), etc.
pic. right: pic. : Mandarin Oriental Taipei -   buffet restaurant: Truffle sauce, not food, so bit salty

pic.: Grand Hyatt Taipei, buffet -   sea food bar Japanese style raw fish slices . The snapper or Tilapia is not very red, so no need to worry it's fake color by CO ...
they have authentication to prove salmon were imported from Norway Europe, but you can't take it by yourself, e.g., you ask Salmon, the chef cut 3 small pieces for you, 12-26-2018

the whole row of India  cuisine were cancelled;

small sweet cake/dissert should be taken by working staff, not allowed to  take freely.

4 items of raw fish slices : :  Tuna、Cobia、Salmon、竹莢魚or swordfish，all are fresh cut upon req. (it's fresh cut, but not too "free" for foodie);

rib (牛小排) and prime steak in dinner only,

Deputy mayor of Shanghai has breakfast in Regent buffet restaurant, has dinner in Grand Taipei (圓山飯店)

Real John Dory is also named as Cat Fish, the author had many in Florida's  buffet restaurant (even "none star" restaurant marked fish name ),  however, in Taiwan's "5 star" hotel can only eat fake Dory ???

◆ ETtoday News : Cutting red-meat fishes like Tuna to slices made its Myoglobin (「肌紅蛋白」)，iron having oxidized and its meat becoming tan or brown in color.  Brownish-red colored meat can indicate spoilage.   Taiwanese gov. advised that people should avoid eating those brown colored, or drying out, or no longer elastic fish meat, which were cut long time ago.   Eating cooked fish is perfect safe.  (health.ettoday.net/news/1017291)

blackfin (blue-fin) tuna toro belly meat should be fresh and red, ruddy, rich oily (油脂豐富),  Those darker or red with black tone in color are not fresh ones (暗紅色或偏黑), but carbon monoxide processed fish are beautiful pink colored, and unchanged all the time.

◆ Daily Mail, UK reported an American guy having raw Salmon almost every day had a 167 cm parasite in his stomach.

pic. : TVBS news of Taiwan - color was fixed in 3 seconds, harming our health 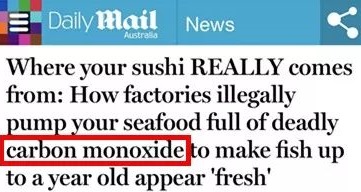 
◆ Almost all 5 star hotel buffet restaurants served farmed Salmon, instead of wild Salmon (expensive, in very orange colored, have not or have little oil stripping).
wild Salmon are orange in color, because they eat shrimps and crabs containing carotenoid, farmed Salmon suppose are gray, because business won't feed them with shrimps which are more expensive than Salmon itself.
However, many dye Salmon by canthaxanthin (斑蝥黃素) to be bright orange in color, eating many those Salmon hurts your liver.

◆  In 5 star hotels in Europe etc, you might see fresh nature "black-headed" shrimps, some Taiwanese business men used chemical addictive (「蝦鮮」保鮮劑，亞現酸鈉plus聚合磷酸鈉) to modify that unpopular black color, eating too many those shrimps might cause allergy、asthma those problems ... ref. to 《食在安心》book by 江守山MD 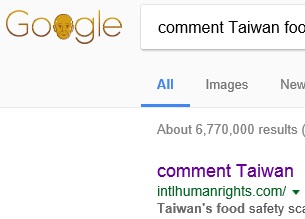 ◆ United Daily (4-24-2016): according to National CK university (成功大學) study and experts advice, avoid eating large-sized fishes, or at most once per week, 6 slices each time, as for fishes with length less than 30 cm are health food.  Top 4 foods with risk of dioxin exposure are (1) seafood/fishes, (2) other protein foods,  (3) domestic animal/farm livestock, (4) Grain products/Starchy Foods, which account for up to 80 percent of the dioxin exposure risky foods in Taiwan. (國人暴露戴奧辛最多食物前四名為(1)魚、水產為最大宗(2)其他蛋白質類(3)家畜(4)五穀根莖)

☉ Below are some dining notes, not guidelines, restaurants may change anything any time, one's meat may be another's poison, just for foodie's references,

Shangri-La's food has not been valued good (no any star or Bib Gourmand) by Michelin Guide Taipei, March 2018.   Their hotel room got Black 5 by Michelin.

(2) Roast beef is not very juicy, although some part looks red.

(3) 8 kinds of Haagen-Dazs ice cream are too hard (frozen) to get/dig, only little softer than Howard Hotel Kaohsiung.  5 star hotels like Shangri-La's Taipei doesn't have this problem ―  perfect soft for taste.

(4) Decoration is gorgeous, but some tables are bad surfaced.

(5) Some waitress served very quick, but some has done bad service to customers.

March 28,  2012,  lunch:
(1)  sashimi skipjack tuna (katsuwonus pelamis 鲣魚)  is "half-raw" fish, which means they burn the outer-part and keep inside part raw , others like salmon are raw fishes.  All sashimi raw fishes are served & cut (about 5-6 pieces per person) upon request, which is different from the way in most 5 star hotel-restaurants like Shangri-La's, Sheraton, Hyatt, Sherwood, Westin, Howard, etc.  So, you probably won't see a plate with a stack of raw fishes on customer's hand .
(2)  roast beef red, but not very juicy, they also have ham.
(3)  hot meal includes braised stuffed goose web, roast beef short-rib (New Zealand), roast lamb with bacons (half-done, tasted good, but bacon not healthy according to medical report), roast pork knuckles (pig feet, the skin tasted good), etc.
(4) Haagen-Dazs ice cream : 4 kinds (coffee, chocolate, mango, the other one is too sweet), last time 2 of them are too hard to dig, this time OK, besides, they provide 4 kinds of Meiji ice cream, but I did not try any of them.

Nov. 7,  2011,  lunch:
Japanese style sashimi raw fish skipjack tuna (katsuwonus pelamis 鲣魚) tastes very good, but salmon sashimi is not good enough, according to those pieces that I tried.
2 out of 4 kinds of Haagen-Dazs icecream/sorbet are too hard (frozen) to dig, particularly for female's muscle, in contrast, Sheraton or Shangri-La's hotel does not have this kind of problem at all, as for Grand Hi-Lai Kaohsiung, is even bit worse than Ambassador.
Japanese style deep fried shrimps still are not very hot.
T-bone steak and roast beef are well-done, so bit 'dry' ―  not juicy enough, unlike those in western hotels, in there customers can select half done or well done for eating.
Not a mass of meat were found within those crabs, comparatively speaking, crabs in Sheraton's buffet dinner at Nov. 3 are better.
Some pieces of roast duck are red & juicy.
ps:  (1) Ambassador's customer service is great, they kindly replied my email expressing opinions as above.
(2) By the way, I also visited my relatives eating in Ambassador Candonese restaurant in the 2nd floor, that place looks elegant.

(2) The number of different kinds of cuisine dishes/desserts in Miramar is not too many, probably about 60% (or half) of that in Sheraton,  Hyatt's, Shangri-La's,...

(4) If you prefer a restaurant not too noisy, Miramar Garden is a good choice, since not many customers dining here tonight ―  about 10+ tables till I left around 7:10pm.

(1) Japanese style fresh sashimi  (raw fishes) almost are about empty around 13 am, they did not supplement more for customers.

(3) Some customer was coughing near dessert area, so I did not try those.

(5) I feel the only great stuff is Haagen-Dazs ice cream, but too hard (too frozen) to dig, so you can't have too much.  5 star hotels like Shangri-La's Taipei doesn't have this problem ―  perfect soft for taste. (test at Mar 6, 2011)

Excellent buffet, wide ranged dishes, I like those very sweet fruits, about 80% customers are western and Japanese.   But lunch buffet does not serve Japanese style fresh sashimi in weekdays, so maybe try Howard Prince hotel not too far.


★★★★★  China (communist Chn.)  ★★★★★★
Chinese proverb : Eating in GuangZhou (or GuangDong) !  How about buffet in GuangZhou , or GuangDong ( including GuangZhou, Zhuhai and ShenZhen )? 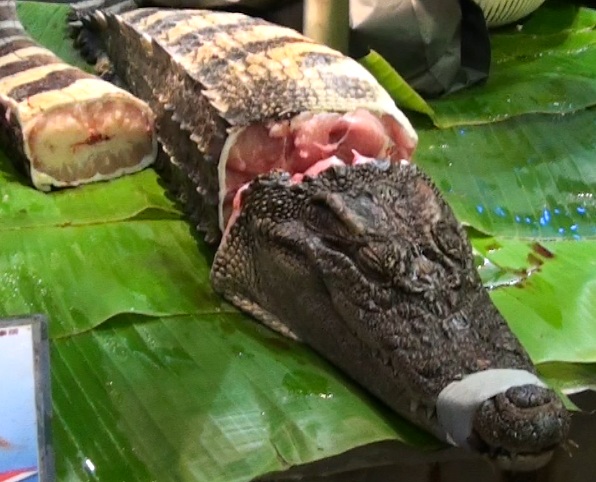 (1)   Sheraton  (廣州 喜來登 Aug. 7, 2011, lunch)  :  buffet price about rmb 218 per person, there're only 5 tables customers when I was there,  according to the restaurant's statement, that's a result of newly opening, seafood bar is not bad, offering oysters imported from New Zealand and some other kinds,  raw sashimi includes salmon imported from Norway, XiLing from Japan, etc, hot dishes are not as many as Taipei's 5 star hotels, small steak has 3 different kinds of sauces, besides, their ice cream does not mark famous brand.  Waitress are attentive, but customers seem political......

ps: TLC, an US TV program, introduced (Oct. 2011) that Guangzhou is a great food destination, including:
§  Shangri-La's hotel cuisine - Summer Palace, like worms (live to cook), frogs (taste not like chickens, just like frogs), star fish (taste like hard sands, but it's not for eating), hairy crabs ( sweeter than anything in the US) ......
§  TLC also visited most famous restaurants in Guangzhou, e.g., 金盈樓 to eat turtles (the bigger, the older, the better), 廣州酒家( most famous restaurant in Guangzhou, providing good dim-sum & traditional candonese cuisines ), 鎮海樓 - 九毛九麵館 (in largest park, offers all kinds noodles, the noodle length can be from home-base to 2nd base)
§  TLC  also tried street food in the road namely,  上下九路.

March 8, 9, 2011 : discount policy changed, lunch about rmb 120, dinner about rmb 150, they served shell oysters imported from Korea, and emerald snails (large), sashimi, ... very few customers seen when I was there, it's the highest riverview western restaurant in GuangZhou.

Aug. 2011 : special price coupon which should be bought one day earlier is higher than that in March 2011.

(4)  Hong Xing, the most famous seafood restaurant (also namely Dong-Jian/East River, near ZhuJiang River ) adjacent to Hotel Landmark Canton has a popular but expensive dish, soft-shell tortoise, about rmb 200 for each.    In Shenzhen seafood street (Ler-Yuan street, or goto beach), only rmb 50 for each,  probably better to select a "People's choice" restaurant in that street .

March 2011 : tortoise price depends where it imported from, Thailand's are cheaper - around rmb 100 (rmb 94  for one 1.6斤),  served very slowly.  They also have crocodile/alligator, probably cook in different way from Florida's.

They offer quite cozy atmosphere, not too many customers (maybe 20s) .

◎  2011 Aug. :   Saturday evening buffet was cancelled, you may leave your contact, so that Yindo can call you once buffet take place again.  At present Yindo only has breakfast buffet, rmb 40-50 for Yindo customers, rmb70-80 for outsiders.