★ 《 United Daily 聯合報》, 3-27-2020:  Taiwan police field has complained since long time ago that there's no basic rule for promotion, it became worse and weird in recent years, the "backers" instead of the system decided every position goes to ...

★ 《 United Daily 》, 3-28-2020, opinion :  The head of Taiwanese police is not the leader of police headquarter but Taiwan president, P.M., and minister of interior／高源流

★ 《 Liberty Times 》, head-page, 5-1-2019: The back door of special-purpose phone for police has been wide-open, all citizens' privacy or personal data were under danger.

The hole of Taiwan's social security net is bigger and bigger...    (brief)

★《 Liberty Times 》(《自由時報》), 6-25-2019:  insulting (by the words "rascal with uniform" or "slave" ), abusing, biting or slapping the face of the policeman by a member of Congress or Council was not charged by the Prosecutor Office, the High Prosecutor Office rejected the appeal and sustained the original conclusions, this case demoralize all the police and cast a chill over the police field.   Legal experts comment that inconsistent standards result in low public-trust and a term "dinosaur judge" ("恐龍法官") all over Taiwan..

★《 United Daily, 聯合報》, 3-31-2019: Taiwanese police had been short staffed for a long time, but pension reforms (年改) recently led to a over-supply...  the police of grass roots think their tasks and services are unreasonable overloaded， the number of staffs will not be enough no matter how many new bloods are employed. 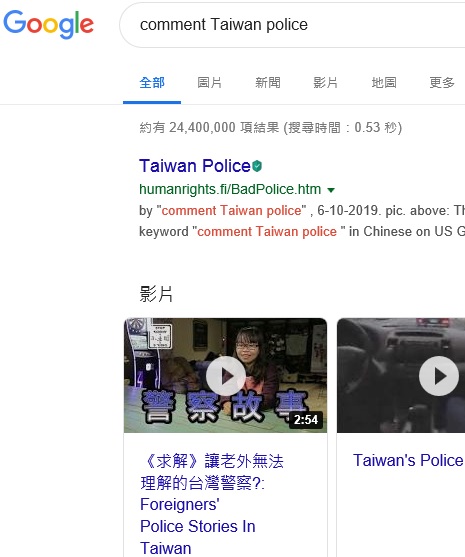 Traffickers lure women from China and Southeast Asian countries to Taiwan through fraudulent marriages and deceptive employment offers for purposes of sex trafficking. Many trafficking victims are migrant workers from Indonesia, the Philippines, Thailand, Vietnam, and to a lesser extent, individuals from China, Cambodia, and Sri Lanka.

★ 《 United Daily, 聯合報》, 12-2-2018: Police (ps: have not cracked down or) gave little penalty to the prostitutes, the business are skilled in using the legal loophole.

★ United Daily, Opinion, 10-15-2017: Enforcement standard varies by skin color or political colors, based upon some cases recently.   How can Taiwan have justice if it is the way in the future.

★《Apple Daily, 蘋果日報》online opinion, 11-28-2018: 'High-way police can only bless for their life safety' - Taiwan police automobile lack "Police package", "safety cocoon for officers" and "5 star" ranking collision test, etc, which Germany and the US do.  / 林書立

●《Apple Daily》opinion, 9-26-2017:  Taipei police Station passed the buck with all excuses, delayed coming the crime scene, and doing nothing to shield violence, let bloody actions happened unchecked just as before while facing mass rally or a gathering's confrontation and arrogantly clamour  (推諉塘塞 姍姍來遲  無作為  縱容暴力) /  王羿方台大學代議長
●《United daily》, 9-26-2017:  The government mastered the situation, made correct judgment but doing nothing, all these led to the bloody event.
●《Apple Daily》headline 9-26-2017:  "Police won't show up until the suspect escaped"

★  《The Liberty Times 自由時報》, 2-12-2017
Too many executors and enforcers working as white-terror hatchet men in Martial-Law period and their followers are still very active in current judicial field including policemen, prosecutors, judges, investigators, etc, they still look up so-called "political-party-state system idiology (「黨國意識形態」)" as principle or model  ...  / 王美琇

protesters occupied the Executive Yuan. Police forcibly evicted them the next day using batons and water cannon. According to media reports, at least 174 persons, including 119 police officers, were injured in the incident.   Local media have reported incidents of police obstruction and violence directed at journalists who were covering protests against administration policies.

White terror returns!!
Taiwan MP abused their power to entrap and search a Taiwanese (suspected of selling White Terror-era documents) house without search warrant and forced to take him to MP station, he is under investigation for Offenses of Receiving Stolen Property (贓物罪) and Offenses Against Privacy (妨害秘密罪)...after this, MP gave him NT dollar15000 trying to "seal his mouth"...

A New-Taipei city police officer entered a girl's house (she reported a legal case so left her address in police station) and forced her to serve an oral sex to him, but this only got minor punishment ( being cited with a 2nd Level Demerit and job relocation) , and still is on duty at  front line.   This police had been convicted of sexual harassment to his colleague's wife 3 years ago. ... (brief)

★  USA Country Reports on Human Rights practices, Feb. 27, 2014
According to activists for lesbian, gay, bisexual, and transgender (LGBT) rights, violence against LGBT persons with HIV/AIDS was a problem, but instances of police pressure on LGBT-friendly bars and bookstores continued to decrease during the year. The police response to violence against LGBT persons with HIV/AIDS was adequate.
The National Police Administration (NPA) of the Ministry of Interior has administrative jurisdiction over all police units, although city mayors and county magistrates appoint city and county police commissioners. Civilian authorities maintained effective control over the NPA, and the authorities have effective mechanisms to investigate and punish abuse and corruption. There were no reports of impunity involving security forces during the year.

Taiwan's police treated by violence some reporters while in the student-led Sunflower movement protest against a trade deal with China, Anti-nuclear movement protest(反核遊行), and China's official visiting Taiwan event (中國國台辦主任張志軍訪台).  Besides, in spite of that the authority investigated the event hackers attacked those media criticizing Chinese government,  Taiwan's press freedom score down to 27 (score 24 in 2014's report).

Amnesty International said in its annual report that concerns remained in several areas, including the freedom of peaceful assembly, Taiwan’s handling of the student-led Sunflower movement protest against a trade deal with China in March last year.  In this protest, more than 200 protesters were summoned for questioning under the Criminal Code and Assembly and Parade Act (集會遊行法), and that they remained under threat of prosecution. (ps: At Feb. 10, 2015, 119 people of them, but no any policeman, already have been prosecuted.  2-11-2015, Apple Daily News, Taiwan)

Police in Taiwan fired high-pressure water cannons on hundreds of demonstrators ( mostly were university students) who broke into the country's Cabinet,   At least 174 people, including 119 police officers, were wounded as the police wielded wooden clubs and later used water trucks.  Demonstrators were injured and bloodied, some got concussions and bone fractures,  the protesters strongly condemn the violence against the unarmed, weaponless students.

Why this event happened:
(1)The nature of this matter is that all levels of society have different views as to the signing of the service trade agreement,  The China trade bill, which would allow cross-strait investment on dozens of service trades ranging from banking to funeral parlors, has touched deep roots of concern, including Taiwan’s own history of authoritarian rule and its uneasy relationship with China, an emerging giant that considers the island part of its own territory that must eventually be reunited.
(2) Some Taiwanese believe parts of the agreement are beneficial to Taiwan's future, but many are incensed by what they believe were procedural errors in passing the pact.    Opponents of the deal say it could harm Taiwan's economy, democratic system and national security.
(3) The content of the agreement was developed in 'black box' negotiations. The agreement was passed without proper procedure.
◎

A police chief of Taipei XinYi (信義) police station tried to not taking necessary step to prosecute a burglary crime by using his own money to pay a store, so as to have lower criminal rate, all his act was taped by a CCTV video camera in that store, this issue resulted in a public outcry. (brief)

Taiwan police's work load is heavier and heavier, but their social status have been declined steadily from bad to worse ...  no dignity/honor (沒尊嚴), worse welfare, no bright future...... The current trend , police's early retirement, is unstoppable, Taiwan police authority worries that not enough police people will affect Taiwan's society security/safety.
CDNS news(中華日報) – June 20, 2014:  More and more Taiwanese don't want to be a policeman, criminal cases everywhere (刑案遍地開花的時代) probably is coming soon because of too many black-guns and drugs ... (「槍子淹肚才，毒品淹目眉」).

Just like a widely-known saying by Wu B.S. (吳伯雄) that everybody except the police knows illegal casino houses are everywhere in Taiwan, night-club's dark side is the same thing, CtiTV (<中天>電視), 9.27.2014 (21:09pm): a reporter (記者羅友志): a police leader of certain precinct, city police department admitted having taken bribery money, and asked him don't tell anybody else.  Another reporter (名嘴江中博) expressed he saw some criminal police took bribery money.

... A <Enemy of the State> drama currently showing in Taiwan, completely reveals Taiwan's public institutions knowing nothing about Taiwanese privacy protection and the spirits of the law...  Now days our national machine can easily collect/gather our personal privacy information in the name of national security... quite lots of people said only bad guys scare being monitored, even it's an illegal action  ―  What's the problem of Taiwanese legal education ?  (正在上演的《全民公敵》戲碼，完全顯露國家公務機關對於隱私保護與法治精神毫無認識。...在科技日新月異下，國家機器以國家安全及治安維護之名，早就可以輕易地蒐羅我們的個資隱私；...一件違法的行為，居然還有人說做壞事的人才會怕監控。台灣的法治教育到底出了什麼問題？ )
◎

★  <Apple Daily News> 1.14.2014
Taiwan's Court hard to control abusing of power by prosecutors & police (「法院難管檢警濫權」author:  錢建榮, Taiwan's court judge)
Taiwan's prosecutors and police do wiretapping by using serious crime felony to cover up misdemeanors(重罪掩飾輕罪監聽), Taiwan's judges don't question their evidences/proofs...... the biggest problem is we don't have full-duty prosecutor's order court ( 專責的「強制處分專庭」), judges take turns to do the job, and don't care too much about those application for prosecutor's order... Taiwan's judiciary practice makes no difference between "judge for investigation" and "judge for judgment"... so Taiwan's Judiciary Yuan fails to reach the basic : to evade/side step the issue of dividing applications (「分案迴避」), e.g.,   those judges during investigation proceedings approve detention of accused, will they think the accused is innocent during judiciary proceedings? .... Taiwan judges fail to reach the goal of professional quality and neutrality ...！wiretapping harms the most Taiwanese privacy, but till now Taiwan fails to send a formal notice to those people being listened... Taiwanese people won't know being listened until they were prosecuted, as for those people not being indicted, they will never know about this ....  Taiwanese people can not do anything about this nation's most serious - mandatory punishment, no one can help them, they are rejected by Taiwan's judiciary systems...

Taiwan's Legislature passed wiretap restrictions yesterday, but vice secretary general of the Judicial Reform Foundation expressed that this amendment works nothing for Taiwanese privacy protection in advance and remedy afterwards (該修正案對人民隱私權的事先保障與事後救濟都是空的), Taiwan should learn "four-eyes-principle" (sync. wiretapping by prosecutors and police with judge's approval together with telephone-service staff inside the machinery/equipment room, Chinese namely "同步監聽") of USA or Japan, Taiwan's current way to do it seriously harms Taiwanese privacy.

◎
★ <Apple Daily News> 1.16.2014 editorial
The legislature yesterday approved revisions to the Communication Security and Surveillance Act (通訊保障及監察法) to toughen the rules governing the use of wiretaps... previously, the prosecutors may keep listening someone even the legal case had already been closed, or the prosecutors may wiretap on a specific person and by the way listen other people in the same case... all these show their (prosecutors, police, investigation units) attitude of abusing power & playing the law.  This amendments immediately led to a rebound (opposition) by Taiwan's prosecutors, police, and investigation units...The Judicial Reform Foundation expressed : Taiwan's judiciary has not made any progress at all unless they avoid wiretapping mistakes by abolishing the watching center or attaching it to or under certain authority remaining neutral, and not allow accessing communication records unless they got the judges' approval...

There were still problems with corruption ( police corruption's limited but still a problem ).
◎

The police department changed both the detective's expression and the defendant's transcript report ― created a phony story.

"Abuse the right of monitoring, what's the difference between Taiwan and "Police State" ! (濫權監聽 台灣與警察國家何異 )

Besides, Taiwanese people don't accept police act against the law, there should be a clear line between police and bad guys.